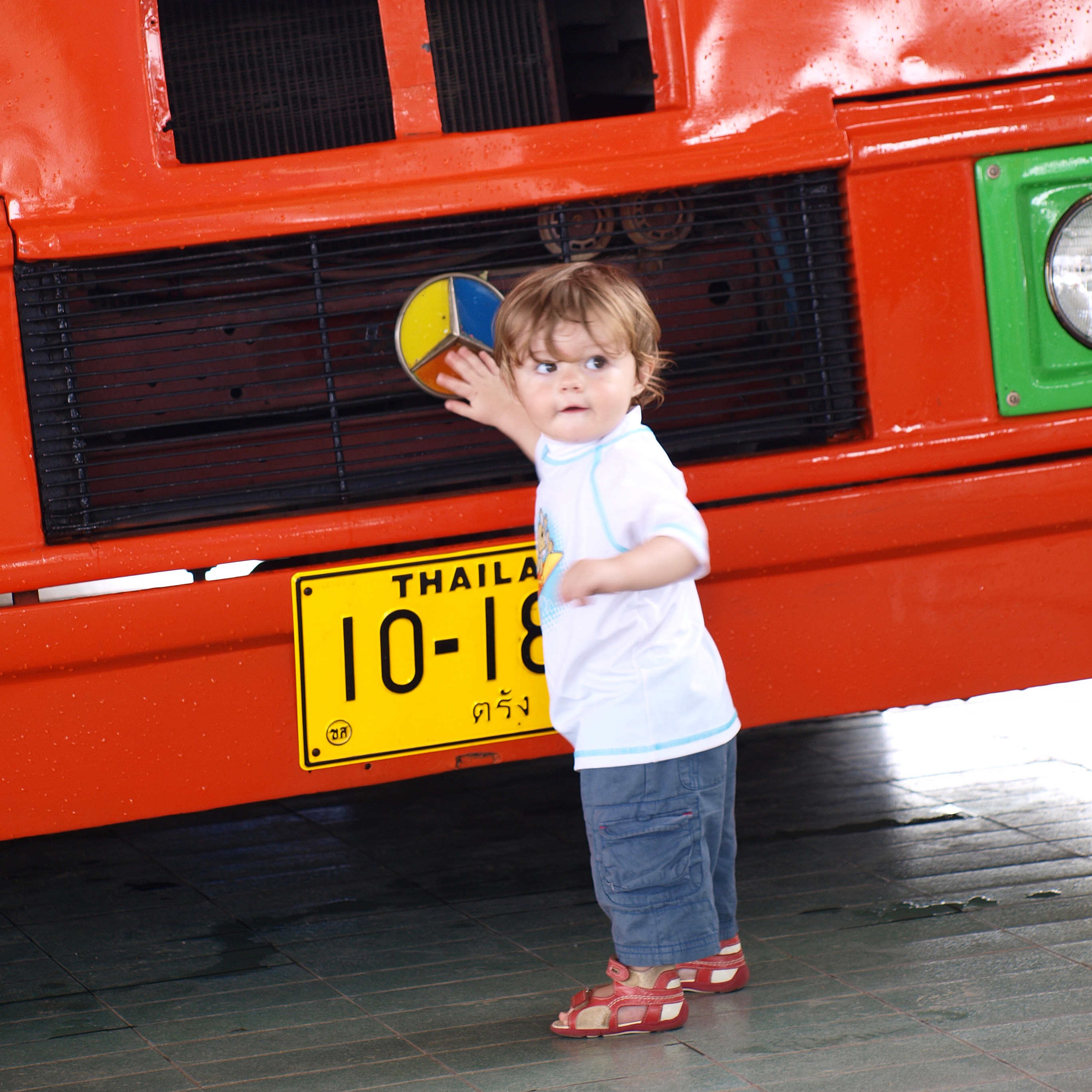 A former boyfriend from my early twenties gave me the nickname ‘road safety Sue’ due to the fact that it didn’t matter how drunk I was, or my fellow party-goers, I was always insistent that every passenger wore their seatbelt on the taxi journey home.

On occasion my husband still uses the nickname, usually if I’m midway giving him annoying (according to him) tips on choosing the safest seat on an aeroplane, or the fact that in a head on collision you’re better off sitting in a backward facing seat on a train rather than a forward facing one.  In fact, before we’d made the decision to come travelling to SE Asia, I’d been busy researching the safest car seat to buy for ‘the boy’ and after some thorough investigation had decided that it was safest to keep him in a rear facing seat until the age of four.

A local bus in Borneo, Malaysia. One of the first of many buses on our trip.

And then we decided that we would backpack around SE Asia.  SE Asia, where seeing five family members balanced upon one motorbike is ‘normal’, where crash helmets are a rarity and seatbelts, well what are they?

As you can imagine this was a huge problem for me. When you’re travelling and make a decision to get on a battered old bus or into a taxi then you’re making your own choices. When you have a baby with you, you’re making a decision on their behalf and you feel very responsible for every journey and every mode of transport that you choose.

A sedate horse and cart ride in Yogyakarta, Java

Initially, getting into a taxi and holding ‘the boy’ on my lap felt very alien, but over the last five months it’s become less strange, but of course, ‘Road Safety Sue’ still has some travel rules including:

The last rule may sound like a strange one, but we’ve found that younger drivers tend to drive faster, more erratically and are a bit more daring with their overtaking. And after our experience of a few older drivers in Borneo, who either couldn’t remember which side of the road they should have been on after overtaking (slightly worrying), or had no idea how to use the controls properly, we plump for the ‘mid range’ every time.  Drivers between the ages of 35 and 55 often have a family of their own and therefore, (well most of the time) tend to be more careful when driving.

Although certain vehicles and journeys still make me nervous, I realise that if you don’t embrace Asia and its travel differences, then we could never have experienced what we have.

To date we’ve travelled tens of thousands of miles on the following modes of transport:

… And we’ve survived to tell the tale.

Top tip of the day:
Don’t be afraid to tell your driver to take it slowly if they’re driving faster than you’re comfortable with. Although this isn’t feasible on all modes of transport, such as a bus, we always requested that the tuk tuk drivers in Bangkok, who often drive at high speed, take it steady as we had a baby on board.
On occasion we’ve had to instruct the taxi driver to stop so that we can try and communicate that he needs to slow down. As Road Safety Sue would say, ‘better safe than sorry’.