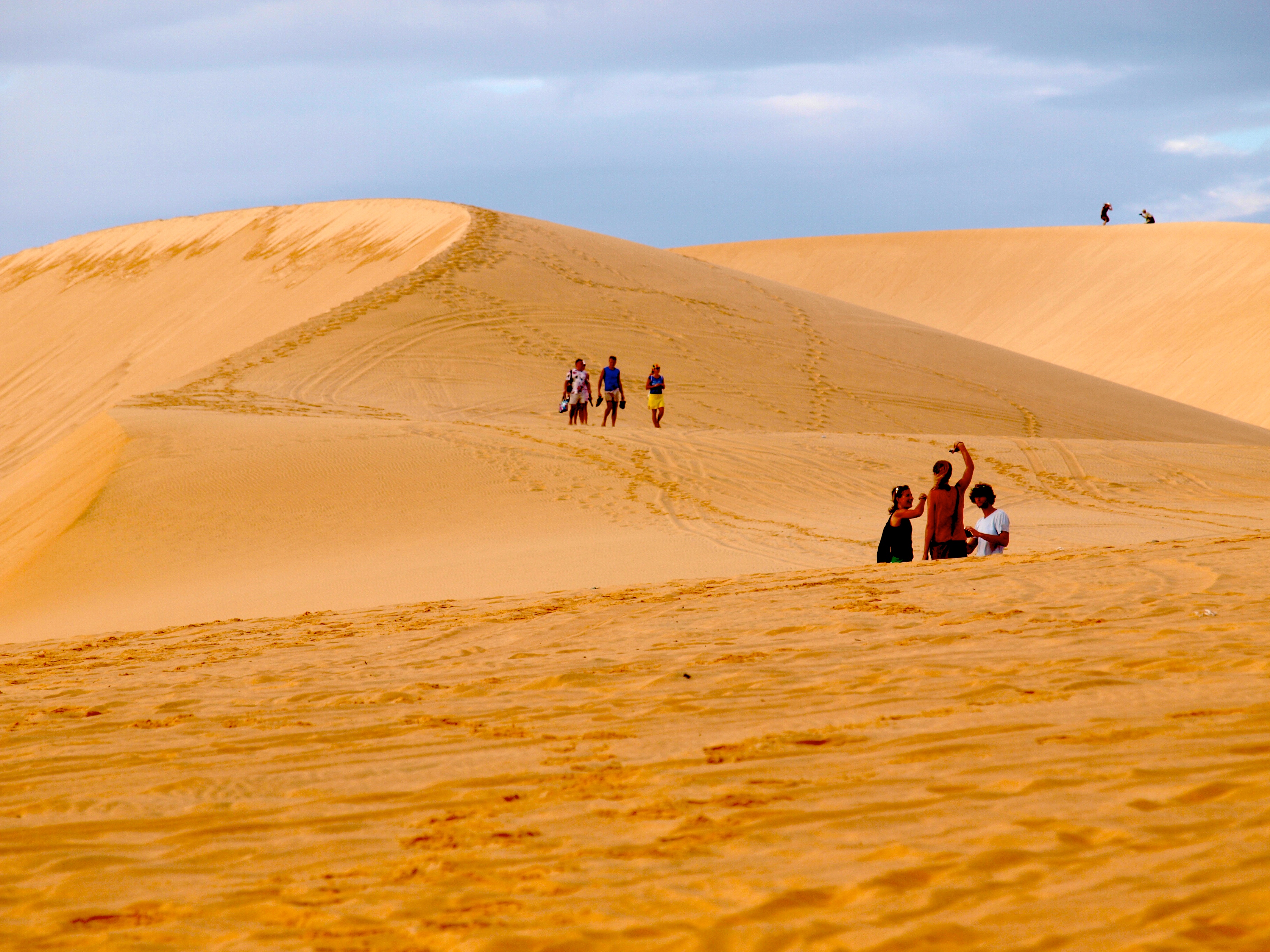 After five hours sitting on a busy bus we were exited to finally see the sea. The journey should have taken four hours, but because of increased traffic on the road for the Tet holiday (Vietnamese new year), we joined thousands of others who were heading out of Ho Chi Minh to visit family and take their annual breaks.

Mui Ne is becoming SE Asia’s Mecca for windsurfing and kite boarding because it has Asia’s strongest and most consistent onshore winds.  This meant two things for us:

1) We would have plenty to look at with hundreds of kite surfers hitting the water everyday.

2) ‘The boy’ would sadly be unable to paddle and enjoy the beach, as he would normally do, due to strong currents and big waves.

Our accommodation overlooked the sea and had a superb garden.  If the beach wasn’t ideal as a playing ground, the garden certainly was.  At the top of the steps leading up from the sea was a small pool for washing the sand off your feet. This became ‘the boy’s’ new baby beach and he spent hours sitting in it surrounded by his toys. It seemed to distract him from the fact that the real beach, which was only ten feet away, was out of bounds.

‘The boy’ enjoys playing in the foot washing pool – his new beach!

Mui ne is also famous for its huge sand dunes. Having never experienced dunes on this scale I was excited about seeing them and watching ‘the boy’ play in the ultimate sand pit.

The dunes are impressive and looked beautiful in the afternoon light. We hiked up to the top of the highest dune,  ‘the boy’ on my back, before releasing him for a run around with a difference. He wasn’t sure what to make of it. Walking had never been this hard before.  With each step, his foot sank down to his knees, making every move an effort. I was secretly hoping that this meant he would tire himself out and we would be blessed with a thirteen-hour marathon sleep later that night. Unfortunately he didn’t!

‘The boy’ tries the dune buggy out for size

Although Mi Ne isn’t the ideal beach for babies, the atmosphere is very laid back; making it was a welcome break after the hectic atmosphere of Ho Chi Minh.

Top tip of the day:
Although our bus was delayed due to the Tet holiday traffic, we’ve found that 80% of the bus journeys we’ve taken over the last five months have taken considerably longer than the advertised times. We’ve got used to adding sixty – ninety minutes to every journey time (which is usually more accurate than the time we have been given) and we plan ahead and take extra food so that we can feed our baby on the go.